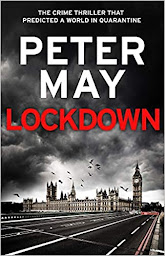 Lockdown by Peter May
Published by Riverrun
Publication Date: 30 April 2020
Genre: Dystopian, Thriller, Police Procedural
Book Description:
'They said that twenty-five percent of the population would catch the flu. Between seventy and eighty percent of them would die. He had been directly exposed to it, and the odds weren't good.'A CITY IN QUARANTINE London, the epicenter of a global pandemic, is a city in lockdown. Violence and civil disorder simmer. Martial law has been imposed. No-one is safe from the deadly virus that has already claimed thousands of victims. Health and emergency services are overwhelmed. A MURDERED CHILD At a building site for a temporary hospital, construction workers find a bag containing the rendered bones of a murdered child. A remorseless killer has been unleashed on the city; his mission is to take all measures necessary to prevent the bones from being identified. A POWERFUL CONSPIRACY D.I. Jack MacNeil, counting down the hours on his final day with the Met, is sent to investigate. His career is in ruins, his marriage over and his own family touched by the virus. Sinister forces are tracking his every move, prepared to kill again to conceal the truth. Which will stop him first - the virus or the killers?Written over fifteen years ago, this prescient, suspenseful thriller is set against a backdrop of a capital city in quarantine, and explores human experience in the grip of a killer virus.
My Thoughts:
I put off buying this book at first when it published in the early days of the coronavirus pandemic. As an NHS worker the reality of dealing with the effects of a pandemic were more than enough to cope with without coming home and reading about a similar situation. But as the situation slowly came under control and the world adjusted to a new way of living my interest piqued and I decided to jump in.
It is amazing that Peter May wrote this with no experience of how life could be under lockdown, and I think he has represented that undercurrent of fear admirably.  Admittedly the circumstances in the book are (thankfully) far worse than we have experienced in reality but it is scarily possible how quickly things could change and we could find ourselves in exactly this position. The streets are under army control, there are strict curfews and anyone not authorised to be out after curfew are at risk of being shot - few questions asked. Which is why the police are so puzzled at how a holdall containing a child's bones came to be dumped in the newly dug foundations of an emergency hospital being constructed to try to cope with huge numbers of flu victims.
DI Jack MacNeil is the detective assigned to look into the case. World-weary, it's his final day on the force having seen the job take its toll on his marriage and personal life. He's had enough and the reality of the pandemic has made him look at his life and re-evaluate his priorities. It's not long before he has thrown himself into the investigation, calling in forensic odontologist and personal friend Amy to help work out the victim's identity. Wheelchair-bound after an incident at work, Amy uses her talents to recreate the young girl's features and becomes as obsessed with the case as Jack.
As the pair work together to find the person or people responsible it seems that they are getting close with their questions as both Jack and Amy's lives are put at risk. With help coming from an unexpected source their enquiries pay off, but not before shocking events can unfold which will have you gripped to the story and the edge of your seat.
I would be amazed if this book isn't adapted for the screen imminently as it is relatable to international viewers with plenty of action and a personal side to the story which I haven't even touched on in this review as I don't think I can do it justice without giving spoilers.
I didn't expect to enjoy this book as much as I did and had rattled through the whole thing in just over a day which I've not done in a very long time. Top marks to the author - especially as he wrote it 15 years prior to the current pandemic. Loved it!
About the Author: 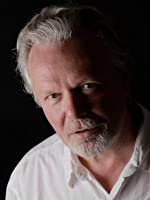 Peter May had a successful career as a television writer, creator, and producer.One of Scotland's most prolific television dramatists, he garnered more than 1000 credits in 15 years as scriptwriter and script editor on prime-time British television drama. He is the creator of three major television drama series and presided over two of the highest-rated serials in his homeland before quitting television to concentrate on his first love, writing novels.Born and raised in Scotland he lives in France.His breakthrough as a best-selling author came with The Lewis Trilogy. After being turned down by all the major UK publishers, the first of the The Lewis Trilogy - The Blackhouse - was published in France as L'Ile des Chasseurs d'Oiseaux where it was hailed as "a masterpiece" by the French national newspaper L'Humanité. His novels have a large following in France. The trilogy has won several French literature awards, including one of the world's largest adjudicated readers awards, the Prix Cezam.The Blackhouse was published in English by the award-winning Quercus (a relatively young publishing house which did not exist when the book was first presented to British publishers). It went on to become an international best seller, and was shortlisted for both Barry Award and Macavity Award when it was published in the USA.The Blackhouse won the US Barry Award for Best Mystery Novel at Bouchercon in Albany NY, in 2013.
Posted by Sandie B at 06:30