If you think photos aren’t important… wait until they’re all you have left of your child. Your life isn’t perfect, but you’re still happy. Your husband has stuck by you and he’s a good dad. Your daughter Becca makes your heart explode with love. And then, in the time it takes to say ‘bad mother’, there’s no longer a place for you in your own family. Your right to see your child has disappeared.Life goes on in your house – family dinners, missing socks and evening baths – but you aren’t there anymore. Becca may be tucked up in bed in Rose Cottage, but she is as lost to you as if she had been snatched from under your nose.Everyone knows you deserve this, for what you did. Except you’re starting to realise that things maybe aren’t how you thought they were, and your husband isn’t who you thought he was either. That the truths you’ve been so diligently punishing yourself for are built on sand, and the daughter you have lost has been unfairly taken from you. Wouldn’t that be more than any mother could bear?A heart-wrenchingly emotional drama for fans of Lisa Wingate, Jill Childs and Jodi Picoult.

Something bad has happened.  We don't know what, but it appears that Mitch and daughter Becca don't want mum Rachel around any more. She has no choice but to leave the family home and try to rebuild her life outside the family unit.

As you read, you can feel how heartbroken Rachel is, she clearly did whatever it was with the best interest of her family at heart but it has backfired on her, big style. Living alone in a grotty bedsit, Rachel reflects on events which led her here and wonders what exactly she did wrong.  According to her husband it all lies in Rachel's head: she worked long hours in London with its associated commute leaving him to bring up their daughter - but that suited him didn't it? Being an artist who worked from home it made sense and brought in a regular income to keep a roof over their heads. Has she neglected family in being the breadwinner? And has this commitment affected her mental health as he suggests it has? With the support of her therapist Rachel slowly builds up her self confidence to tackle the issues which have floored her.

Finding a new job closer to home brings with it a new group of colleagues and some unexpected new friends - the last thing Rachel was expecting as her plan was to keep herself to herself, the judgment of outsiders is the last thing she needs. Her previous experience of close friendship has left her trusting very few people, but when workmate Leona invites her along to a group for absent parents to support one another she finds there a lovely lady named Viv, an older lady with a heart-wrenching story of her son who has special needs. They build up a very close bond so when Leona suddenly steps back from the support meetings Rachel is preoccupied with helping Viv in her hour of need.

Through various threads in the story we find out what really happened between Rachel and Mitch that fateful night - and the reader is not the only one to have their eyes opened to the facts. I am a great believer that the truth will always come out and with this in mind I was content with the way the book drew to a close.

I enjoyed this book as it tells the story of a broken family from the absent parent's point of view for a change - things aren't always what they seem from an outsider's perspective and this story shows that we should never judge anyone without knowing the full story. The person who steps away is not always the one who has done wrong.

I would like to express my thanks to the author Alison Mercer, publisher Bookouture and Netgalley for the opportunity to read this book as part of the blog tour. 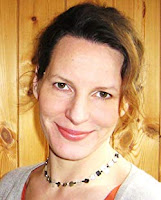 Ali decided she wanted to be a writer early on and wrote her first novel when she was at primary school. She did an English degree and spent her early twenties working in various jobs in journalism, including as a reporter for the showbusiness newspaper The Stage. She started writing fiction in earnest after getting married, moving out of London to the Oxfordshire market town of Abingdon and starting a family. She has two children, a daughter and a son who is autistic and was diagnosed when he was four years old.
Ali is fascinated by families, their myths and secrets, and the forces that hold them together, split them up and (sometimes) bring them back together again. She always travels with tissues and a book and has been known to cry over a good story, but is also a big fan of the hopeful ending.
For updates and pictures, follow Ali on Twitter (@AlisonLMercer) or Instagram (@alimercerwriter), or on her Facebook page (AliMercerwriter).
Posted by Sandie B at 06:30